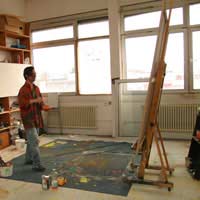 Expressionism as a term applies chiefly to painting drawing and printmaking undertaken in the late 19th and early 20th Centuries, with an emphasis on expressing emotion.

Put simply, there are two broad strands in artistic creation, the more orderly and logical strand, which philosophers termed at the time ‘Apollonian’ and a more free and emotional strand which was referred to as ‘Dionysian’. Apollo, the Greek god who gives his name to Apollonian art was the god of light, poetry and music, whilst Dionysius was the god of drunkenness, emotion, darkness and excess.

Quite why art made in the Dionsyian manner – heavy, emotional art – came to prominence in this period is unclear, except to say that this was a period of great change and upheaval within the arts and society and that this possibly led artists to examine the inner world of their feelings, in order that they may better be able to then adapt to the outer world, or indeed to change that outer world. Artists famous in this first Expressionist period include: Egon Schiele, Edvard Munch, Vincent Van Gogh, Emil Nolde, Georg Grosz and Oska Kokoshka, amongst many others.

Expressionism has continued to flourish in pockets since it started, and can be seen in variations of Abstraction (such as ‘Abstract Expressionism’: see related article – ‘Abstract’) and in the work of the ‘Neo-Expressionists’ in the 1980’s, a group of German painters who returned to Expressionism to convey their despair at the political situation of the time (for example, Georg Baselitz: b.1938). Aside from these very direct engagements with Expressionism, the need to express oneself in art has never abated and, in fact, can be seen in the work of artists who preceded the Expressionists of the late 19th Century, such as El Greco (1541-1614) and Goya (1746-1828).

Expressionist artwork tends to be characterised by broad gestural marks, heavy and intense colours and strong tonal contrasts. Subjects tend to include the cycle of life and death, forlorn love, illness, childbirth and humankind’s relationship with nature.

Making an expressionist artwork depends as much upon the inner reality of the artist as on the world outside, so to done effectively it involves some awareness of one’s feelings. On other hand it also involves some awareness of the world outside, and of how people may perceive your feelings and expressions. Getting the balance right can be tricky, and if one is not careful, an explosion of emotion upon paper or canvas can appear to be a mess!

The key is in firstly clarifying the expression, or emotion that you are wishing to convey, and in then trying to find a universal language to express it. For example: Red expresses anger and passion, whereas to paint a passionate emotion in pastel blues will in all likelihood evoke calmness. The same can be said for all of the elements of painting and drawing: it is always possible to find a clear and universal way of expressing what are universally felt emotions. The most important thing here is to know yourself and to understand the audience you are trying to speak to.