Home > Painting Exercises > How to Abstract a Form

How to Abstract a Form 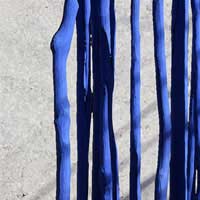 Abstraction is one of the most readily understood forms of painting as many people believe it to entail merely a random and arbitrary application of paint to a surface. In actual fact the most successful abstractions are always based either upon real forms or on the concept or phenomenon of something.

From the earliest days of abstraction in the early 20th Century to its final development in the 1960’s, abstraction was always heavily underpinned by a grounding both in reality and in theoretical debate.

Abstract art is covered elsewhere in this site, so for now we will focus upon the practice of abstracting a form. That is to say, will examine what it is to take a form and simplify its representation in order to come up with painterly image of that form, which whilst being based on that form, will become something in itself. This kind of melding of the original form with the intentions of the artist represents an interplay between the artist and nature that accords with a product that springs from the activities of both nature and artist.

In this sense abstract painting is a harmonious practice taking from the artist’s surroundings, and not an exercise dependent purely on the whims of the artistic imagination.

Paring Down a Form

Abstracting an object relies on the reduction of its form to its simplest parts. It is in this sense a form of exaggeration, whereby the most pronounced aspects of this object are bought to the fore, whilst other elements are disregarded as superfluous. In this way a painting of a white blob on a blue background comes to stand in as a cloud, despite the fact that we all know clouds to vary considerably and often to be long and wispy rather than blobby and cotton-wool like.

One of the best ways to simplify a form is to observe it and draw or paint it repeatedly. Eventually certain aspects of your drawing will start to dominate. From here you can choose areas that for you best represent your chosen form. In this way the Boccioni’s sculpture ‘Unique Form of Continuity in Space’ (1913) was conceived a simplified vision of a man running. By honing the elements of the body down to near-geometric shapes, Boccioni created an abstract sculpture which possibly better conveyed movement than an anatomically accurate sculpture would have. The same can be said of the painting of Leger (1881-1955), who simplified people and industrial machinery to cylinders and other geometric formations.

The end result of abstraction of this kind is always the realisation of an image that whilst being influenced by a given object, gives way itself to a new object – the painting. In this way abstraction becomes a logical process rather than a quasi-spiritual or emotionally cathartic experience. Arguably, abstraction often arises also from emotion (as in the work of De Kooning, 1944-97) or from an attempt to convey the spiritual absolute (as with the work of Rothko, 1903-1970), however, it must be noted that abstract artists who work in this way always have the physical world in some sense as their reference point: often their abstraction was the result of decades of earlier study of the human form or the landscape.

Abstraction in this sense is one more tool for the creation of new images and effects on the canvas.