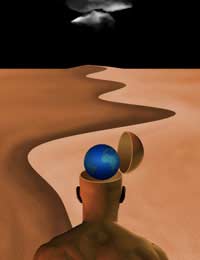 Surrealism is a style developed in the early 20th Century and highly influenced by philosophical and psychological currents of the time. The Surrealist Movement was an organised network of artists dedicated primarily to exploring the effects of the unconscious mind on artwork. This primarily entailed focusing upon the roles of dream fantasy and chance experience as a means of evoking images that were then painted, drawn, photographed and filmed.

Drawing on knowledge of psychoanalysis, word games were often played by the surrealist in which it was hoped interesting hidden association were thrown up. Humour was also employed by juxtaposing unrelated objects within works (such as a lobster and a telephone) and by making use of the ‘non-sequitur’. The non-sequitur is a response given in conversation that has no relation to the phrase that preceded it, as in:

The purpose of the non-sequitur in surrealist art is to jilt the viewer from their normal relational system of thinking into a consideration of the truth that, arguably, lay’s in the sub conscious. The artist aims to convey through artwork the sense of absurdity present in the non-sequitur, the idea being that the phrase said expresses something of what is really going on in person two’s mind.

Prominent Surrealists included Salvador Dali ( 1904 – 1989 a household name who has a huge influence on artists our generation), Man Ray ( 1890 – 1976, who’s experiments with photography have been groundbreaking and Andre Breton (1896 – 1966), famed for the iron grip that he ruled over the Surrealist movement with. The surrealists were famed for behaviour as bizarre as the artworks they produced as the movement favoured eccentrics. The surrealist style is certainly one for the poets and natural creatives among us.

The Exquisite Corpse game is one that you may be familiar with. It is little known that it was initially a game played by Surrealist artists to free up their unconscious creativity. To try this exercise you need a sheet of a4 paper, two pens or pencils and two artists.

Divide the paper by folding into 5 sections and fold on top of itself so that only one section is visible initially. Each artist takes it in turn to draw a section of a human body from the head to the toes, yet each time the paper must be folded so as to avoid seeing the progress of the drawing so far. The result of the drawing will inevitably be surprising, often appearing to be bold and humorous despite its poor proportions.

Another exercise involves keeping a visual dream diary whereby you leave a sketch book by your bed and draw the impressions you remember from your dreams upon waking. This can provide a valuable source of inspiration, and after a while you will start to see a variety of recurring visual motifs in your dreams that can become a rich source of subject matter for the artist.